Almost all of us have at some time or other experienced some sort of swelling: We spend our days in sedentary office jobs, or hunch behind our computers, only to notice much later that our ankles are swollen.

Pregnant women complain that their fingers, legs an ankles have practically doubled in size.

The fit and adventurous choose to hike and climb at weekends, or play at robust sports, only later wondering at their puffy fingers and hands.

Or, you finally do a garden clean-up and get stung by a bee, as a result of which half of your face becomes swollen.

But there are other, more serious reasons for swelling:

You have had breast cancer surgery. And now your arm starts swelling.

You have had a malignant lesion surgically removed from your leg, and then your leg suddenly is getting bigger.

If any of this sounds familiar to you, you have come face to face with oedema.

While the initial causes for the formation of the swelling in the above instances are all different, they all involve the accumulation of fluid in the soft tissues of the skin due to an insufficiency of the lymphatic system.

Yet, while we could interchange the term “swelling” with the word “oedema”, this is not always true. Because in some of these cases the swelling must be considered lymphoedema.

So, when is a swelling considered oedema, and when is it lymphoedema? 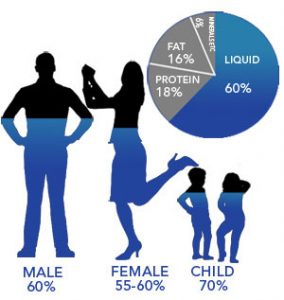 In order to understand the differences, it is important to consider that a large portion of the human body consists of water.
Medical textbooks agree that the water content of an average weight male is about 60%, in a female about 55%. In a male weighing 72 – 75 kilograms, this amounts to approximately 40 litres of water.

About two thirds of the water resides inside the body’s cells in the intracellular fluid compartment, one third is located outside the cells in the extracellular compartment. Of the fluid residing outside the cells, one fifth is located inside blood vessels as intravascular fluid. The remaining fluid, approximately 10.5 litres, is distributed in the interstitial tissue between the cells. This is called interstitial fluid.

Oedema occurs when excess levels of interstitial fluid accumulate – either too much water leaves the blood capillaries, or the water located in the tissues is not reabsorbed efficiently enough back into the blood capillaries. Oedema may affect the entire body, in which case it is called anasarca, or generalized oedema – or it may affect only certain parts of the body, in which case it is called localized oedema. 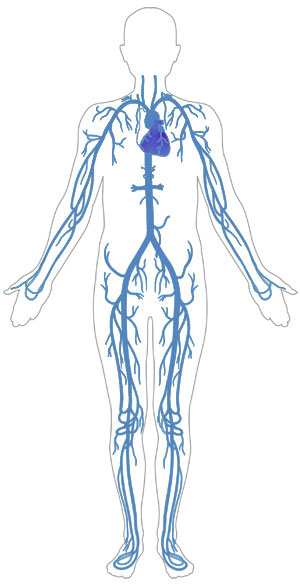 The cardiovascular system consists of an elaborate network designed to deliver oxygen and nutrients to body organs and to remove waste products of metabolism from the tissues. Blood that has been oxygenated in the lungs is pumped out of the heart through the aorta, the largest artery in the body. The aorta arches upward from the left ventricle of the heart to the upper chest, and then travels down towards the abdomen forming the main trunk of the arterial circulation. The aorta then branches off into numerous smaller arteries, which deliver oxygen-rich blood to the various body systems. These arteries further subdivide into smaller vessels, and ultimately into blood capillaries, which consist of an arterial and a venous loop. The exchange of fluids, gases, nutrients and waste products between blood and tissue occurs across their walls.

On its way back to the heart, the venous blood passes through progressively larger veins and ultimately connects with the heart. A large part of the waste products is extracted from the blood as it flows through the kidneys.

The lymphatic system is the silent partner of the cardiovascular system. As you will remember from the Lymphatic System page, it consists of lymph nodes and a network of channels in the body that carry lymph fluid, which is a colourless fluid containing mainly water, protein and white blood cells. The water content in the lymph fluid is comprised by a fraction (about 10-20%) of the fluid which leaves the blood capillaries, but is not reabsorbed back into them. In fact, the lymphatic system is vital in that it runs parallel to the blood circulatory system and represents an accessory route for fluid to flow from the tissue spaces back to the bloodstream. The lymph fluid is returned to the blood circulation via larger lymphatic vessels, called lymphatic trunks, and amounts to approximately 2-3 litres per day. Unlike the circulatory system, in which the heart acts as a pump to circulate blood, the lymphatic system does not have a pump to circulate lymph fluid.

Instead, larger lymph vessels contain one way valves and small muscles, called lymph angions within their walls. These tiny mechanisms contract consecutive sections of the lymph vessels, creating a peristaltic effect which facilitates the movement of lymph through its vessels.

Under normal conditions the body strives to maintain a balance of fluid in the tissues by ensuring that about the same amount of water entering the body also leaves it. However, a number of factors can upset the fluid balance in the body, which may cause the onset of either oedema, or lymphoedema.

Rather than a disease in itself, oedema is a symptom that can be caused by a number of conditions, including:

In all these cases the accumulation of fluid in the interstitial tissues is caused by the insufficient return of venous blood. This is called venous pooling. When this happens, the high volume of blood and the consequent increase in hydrostatic pressure inside the veins and blood capillaries makes it difficult for fluid to move from the tissues back into the vessels. While the lymphatic system tries to correct this imbalance by working harder, the elevated levels of tissue fluid is too high for the lymph vessels to compensate.

Oedema may also be caused by a change in the concentration of serum proteins (hypoproteinemia). Proteins in the blood have the ability to retain some water and salts within the blood, and a lower level of proteins may affect the movement of fluid in and out of blood capillaries, causing excess levels of water to accumulate in the tissues. A loss of serum proteins may be caused by kidney, liver or thyroid diseases, but also by malnutrition, excessive bleeding, chronic draining wounds and excessive burns.

Inflammatory reactions caused by traumatic events and arthritis are also a common cause for the onset of oedema.

Oedema is a visible and palpable accumulation of excess levels of fluid within the tissues. A gentle, steady pressure with a thumb on the oedematous tissues produces a temporary indentation. Oedema can be a temporary or permanent symptom and its treatment focuses on the correction of the underlying condition. If this condition can be resolved, the oedema dissipates. If the underlying cause can’t be corrected, oedema may be treated by elevation of the affected body part, wearing compression garments, diuretics, or dietary changes focusing particularly on a low salt intake.

Lymphoedema can present in the extremities, head and neck, trunk, or external genitalia. In some patients, the accumulation of protein and water in the tissues may be gradual, in others it may be sudden. But in either case, the result is always a high-protein oedema. The high protein content in lymphoedema can lead to secondary complications, such as hardening of the tissues over time, infections, and an increase in volume, especially in untreated, or mistreated lymphoedema.

Contrary to oedema, a low-protein swelling, lymphoedema is a disease rather than a symptom and its underlying cause. Its underlying cause, namely the insufficiency of parts of the lymphatic system, cannot be reversed. Lymphoedema does not dissipate by itself and continues to progress without adequate treatment.

On the following page, we will look at managing and treating lymphoedema.

Little is said about the psychological affects of lymphoedema, despite its profound impact on the person dealing with it. Lymphoedema can cause pronounced social inhibitions because of being self conscious, it can cause depression, embarrassment, disfigurement, feelings of hopelessness and helplessness. You often go through tremendous life style changes and feel worthless and useless. It can cause sexual dysfunction as both male and female lymphoedema patients can acquire genital lymphoedema.

You go through periods of struggling with feeling humiliation, despair and you can experience terrific pain, though this is usually not a painful condition, generally speaking.

You also go through a lot of anger. Anger at why you have this, why the medical world knows so little about this condition and sometimes seems to care little either.

For cancer patients, it’s a double impact. While you are dealing with cancer, its side effects, whether or not you are going to live, the effects of radiation and chemo… now all of a sudden your body starts swelling out of control. What is going on???

If you are going through these emotions, please don’t be afraid to let your doctor know. You may need professional help to get through this. You may also find a lot of comfort and encouragement in joining a support group.